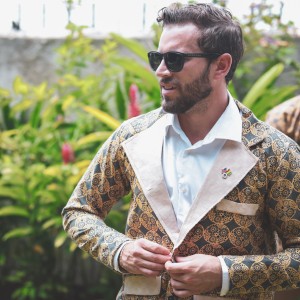 On the first day arriving in country, I remember being led past a barrage of taxi drivers to the Peace Corps bus in the airport parking lot. Each person lugged the bags that contained all of their belongings for the next 2+ years. We had arrived on a unusual day without rain, so that familiar West African sun baked us from above and heated the asphalt below our feet. Compound this with the fact that we had just spent around 24 hours either on a plane or sitting in an airport and you might begin to understand how we were feeling.

At the same time, we were all excited. A Peace Corps volunteer (or potential Peace Corps volunteer, as we were then) is a special breed of person. We hear the bustle of a crowd or the sizzle of street meat and instantly feel the urge to explore. Despite my having spent about three months with Peace Corps in Mozambique, the energy in the streets felt both unfamiliar and invigorating. This is what we had signed up for.

During swear in we make the following pledge:

I promise to serve along side the people of Guinea. I promise to share my culture with an open heart and open mind. I promise to foster an understanding of the people of Guinea with creativity, cultural sensitivity, and respect. I will face the challenges of service with patience, humility, and determination. I will embrace the mission of world peace and friendship for as long as I serve and beyond. In the the proud tradition of Peace Corps’ legacy, and in the spirit of the Peace Corps family past, present, and future- I am a Peace Corps volunteer.

Swear in is when we officially make the transition from trainees to volunteers, but functionally we had already adopted the mindset of a volunteer. We started that transition as we bought things in the market and made Guinean friends. French and local language started slipping into our English conversations, and our jokes became less about new foods and practices and more about how familiar everything had become and how much we were craving rice and sauce. And I think we knew we had made the transition when our questions in sessions shifted from “How will I feed myself while at site” to “What’s the most effective way to support girls’ learning in a male-dominated class room?”

Swear in was a week ago, and now I’m the last one sitting in Kankan waiting to be installed at site. The past week has been a slow accumulation of goodbyes which culminated this morning in me helping two of my friends pack all of their things into the car to head to site. Truly, I’ll see all of these people in three months at our next training week, and many of them sooner. But there are a lot of changes coming, from learning another language (Malinke) in a language I have only known for three-ish months (French) to making new friends and beginning teaching.

That’s what it’s all about though, isn’t it? It’s what we all signed up for before walking through that airport parking lot at the beginning—that’s why all 43 of us are still here. I’m proud to be a part of this group, and it’s amazing to see the transformation that we’ve been through these past three months of training. Here’s to the next two years.

What’s this PST thing anyways? | The Tailor of Dubréka

Want to stay updated with where I am and what I’m thinking about? Enter your name and email below and I’ll add you to the email list. Don’t worry, I hate unnecessary email just as much as you!